The Victorian and Edwardian plant hunters often named plants they thought were new, but were in fact simply different examples of a previously described species. Failing this, they might name a new sub-species of an existing species based on infinitesimal differences. Many of these names are now redundant, and the current taxonomy recognises fewer Asian Buddleja species and subspecies than in the past. Sometimes it seems a species might be better described as a species aggregate or species complex, because there is a high degree of infra-specific variability; this could be a sign of ongoing or incipient speciation.

Buddleja species can be particularly tricky - they hybridise easily; conversely, they can be highly self-fertile; they often have large genomes carrying recessive traits which seem to pop-up from nowhere in later generations.

This is a B. forrestii with a number of names. It was first known as B. longifolia, before being renamed B. pterocaulis. Then the species was sunk under B. forrestii.

After several years and letting it take over half my greenhouse, it has finally flowered, and a rather pathetic tiny panicle it is too. Still, it's enough to identify the species accurately.

Clearly, this is a form of B. forrestii, and pretty much typical for that species. The literature suggests the flowers are usually violet, but these have opened white. The individual flowers conform exactly to the species description for B. forrestii. Using a magnifier, you can see the exterior of the corolla and calyx are glabrous (almost hairless) and the corolla tube flares towards the mouth. The interior of the flower is pilose (fewer spikey hairs), with the stigma almost level with the stamens. When dissected from the rest of the flower, it is obvious that the ovary is also glabrous.

Based on these very typical features, I have no idea why this was ever accepted as a discrete species.

I came across a plant called 'Midnight Skies' in a local garden centre. Available via Lowaters Nursery (Hampshire), I believe this plant was originally bred by Peter Moore (Longstock Nursery and National Buddleja Collection). A more traditional Buddleja davidii cultivar of normal proportions, its flowers are a good purple colour, although not quite a shade I would call midnight. A common feature of these darker colours is a paler, sometimes almost white, ring around the orange eye; even 'Black Knight' shows this tendency. Were this fading centre to be absent, the flowers might appear really dark.

The number of Buddleja cultivars must have doubled over the last decade. And here is another to add to the list - 'Pink Panther' ('RuttenBU2016'), a selection by Pierre Rutten in France. This one promises to remain compact at less than 1.5 metres in height and a smaller spread. The flowers should be large for such a small cultivar and of a bright true pink. Many pinks are more like a lilac colour or else too brash, and I'm very interested to see the exact shade of this 'Pink Panther'.

With so many new plants on the market, 'Pink Panther' will have some stiff competition from other pink cultivars like Buzz 'Candy Pink', but it looks quite promising. 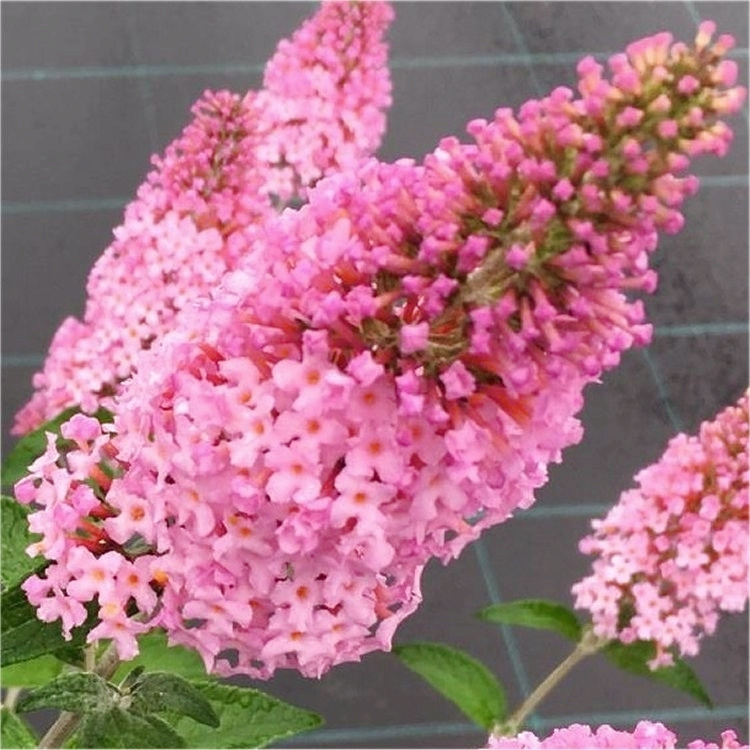 The output of new Buddleja varieties seems to continue unabated. This one is something a little different from Thompson and Morgan - a plant similar to the successful Buzz series, but with highly branched flowers. Buddleja Octopus has a branching habit and is compact, reeacing only about 120cm in height. The multiple flower panicles are rather like 'Dartmoor' or 'Camberwell Beauty'. I'm not sure each flower-spike has eight limbs, and it looks like there's possibly a higher number of flower-branches.

The flower colour is advertised as magenta, and I'm interested to see actual shade when I start growing this cultivar, to see whether it is brighter than the rather dull 'Camberwell Beauty'. It should be quite showy and promises a longer flowering period.

I believe 'Octopus' and its siblings were code-named Buzz2 when being developed by Thompson and Morgan's own breeding programme (now defunct), and possibly others with different coloured flowers will appear in subsequent years.

The blue-flowered form of the African species B. salviifolia, which has felted sage-green leaves, is the most familiar to horticulturalists. There is also an 'Alba' or white-flowered form in the trade with slightly different foliage, still sage-like but the leaves are longer and with a more ruckled (bullate) upper surface. Neither is necessarily typical for the species in its native range.

I was able to obtain some seeds from South Africa (Silverhill Seeds) and grow a handful of seedlings. Their foliage is more like the 'Alba' type, perhaps not quite so long. One seedling has flowered and it's a pale lilac. That's something I've been wanting for a couple of years. With lilac-flowered specimens all but absent from nurseries and collections in the UK, I'm rather fortunate to have found one in a tiny packet of seeds. Although South African websites suggest this colour flower is very common, if not the most common, for this species, so perhaps it's not luck after all.

The blue and white ones have proven reasonably hardy and I'm hoping this one too can take the frosts.

B. salviifolia with lilac flowers.
Open full size image in a new window

Everything seems slow to get going this spring, and it can be a risk to start pruning, repotting or planting out before the Buddlejas have responded to the longer days.

So I've had a chance to look at some of the old pages and start the process of updating. The B. globosa and Buddleja araucana page was looking a little tired and I had some new information to add. The new version is up now, with better photos and a new format.

B. globosa was actually the first Buddleja grown as an ornamental in England, introduced by the Vineyard Nursery in Hammersmith, way back in the late 18th century; that's a hundred years before B. davidii was introduced into gardens. The illustration is by the renowned French botanical artist Pierre-Joseph Redouté, and dates from an 1809 edition of Henri Louis Duhamel de Monceau's Nouveau Duhamel, ou Traité des arbres et arbustes que l'on cultive en France, showing the species was already being widely cultivated in France by this date.

An antique print of B. globosa from 1809.
Open full size image in a new window

There is a new page on The Buddleja Garden. I've accrued a lot of information on Buddleja forrestii and Buddleja macrostachya, so I thought it was time to give these two species their own page. There are plenty of photos of specimen plants, so many I've included an additional gallery of those I couldn't fit onto a single page. The two are very similar: there's plenty of detail on how to tell them apart.

Growing a number of different plants of each species has been quite instructive. I've been able to tear flowers apart and look at them closely, something you can't really do when visiting other people's gardens or botanical collections. I've grown some seedlings from my plants, and included some of the resulting hybrids on the Supplementary Gallery page.

Link: B. forrestii and B. macrostachya. 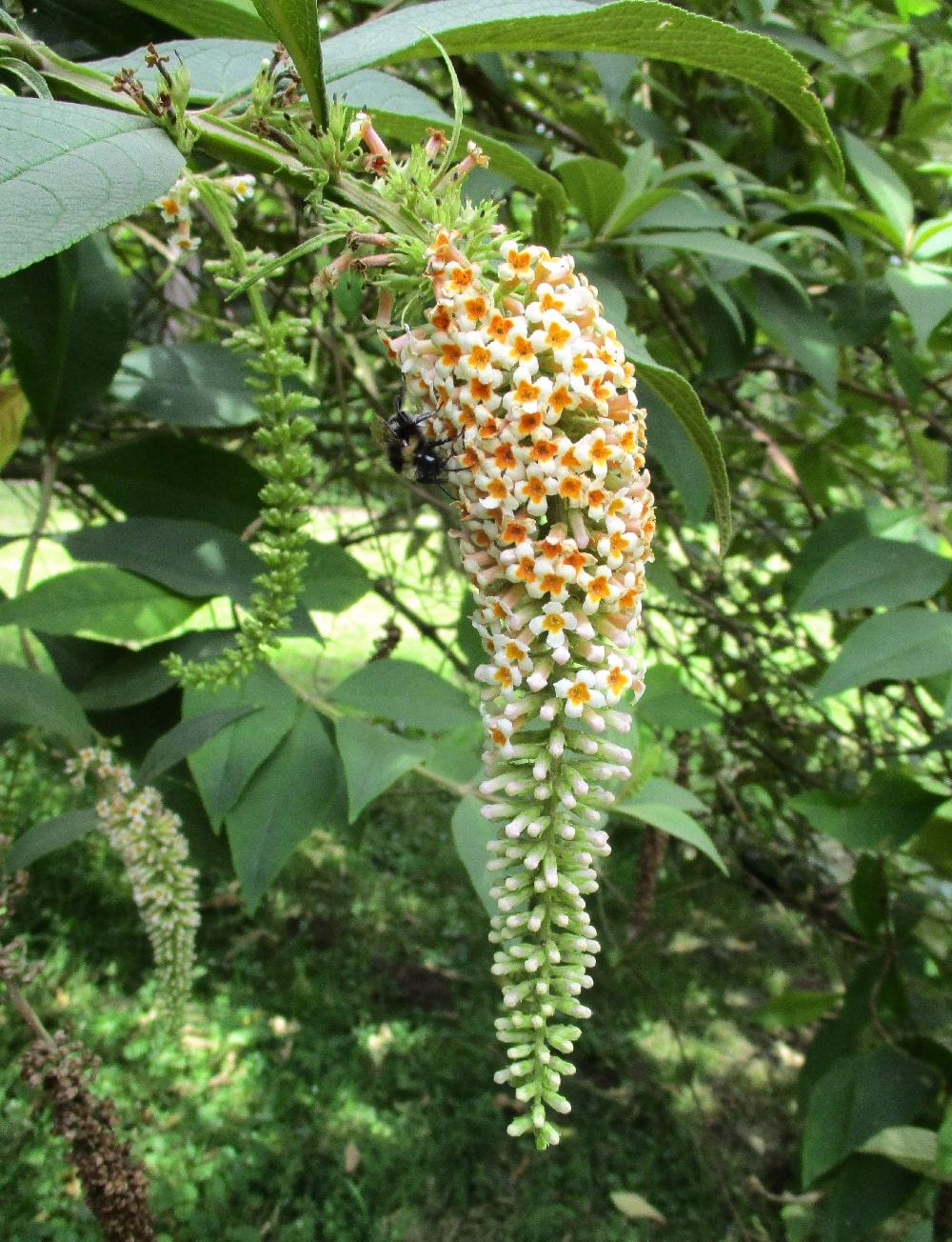 Another new look for The Buddleja Garden Diary. The page is now 'responsive', which means it should automatically adjust for small screens on phones and tablets. I've tried to keep the appearance much as it was before: simple, uncluttered, and concentrating primarily on the content. The top-menu is new.

Later, I hope to convert more pages to be responsive without changing the layout for desktop viewing.

In the meantime, here is my favourite antique illustration of Buddleja colvilei, which should change size with the window.