An Introduction to Buddleja davidii

Out of the hundred plus species of Buddleja it is B. davidii that has become the most popular garden shrub, only being introduced at the end of the nineteenth century and more than a century after Buddleja globosa. Part of the reason for its popularity must be the way in which the nectar rich flowers attract butterflies to our gardens, gaining it the alternate name of Butterfly Bush. Also they are robust, grow rapidly and repay a little attention with a stunning display of flowers in the summer.

Although by no means popular with local authorities or Network Rail feral Buddlejas are the most appealing of weeds. Their ability to grow on waste ground, demolition sites, railway-lines and even in the mortar of walls is remarkable. Their native habitat is in China where they grow in forest clearings, riverbanks and limestone outcrops, able to get a hold in fissures of the rock. This explains why they are able to get a hold in lime-rich mortar and survive with minimal nutrients.

The reputation as an invasive weed is somewhat undeserved and it really doesn't out-compete native plants or disrupt ecosystems in the way that, for example, Himalayan Balsam or Rhododendron ponticum do. Buddlejas don't form thickets like rhododendrons, nor do they cause toxicity in the soil they inhabit. When they do get a hold it is due to a lack of basic maintenance: the Budlejas that Network Rail have to expensively deal with are often several years old, whereas as young plants are relatively easy to remove. Significantly Buddleja davidii is not legally an invasive plant. Schedule 9 of the Wildlife and Countryside Act 1981, as amended in 2010, does not include Buddleja davidii, although many other common garden plants are included (1). 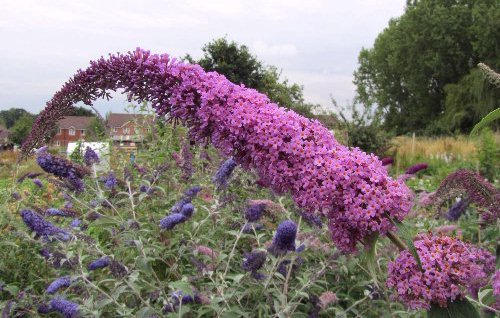 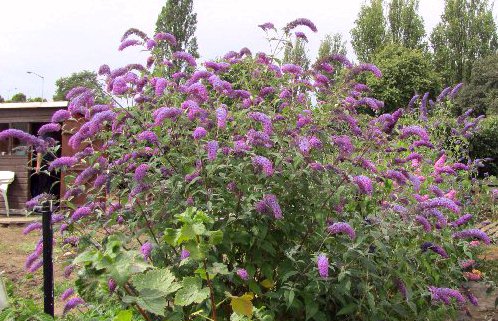 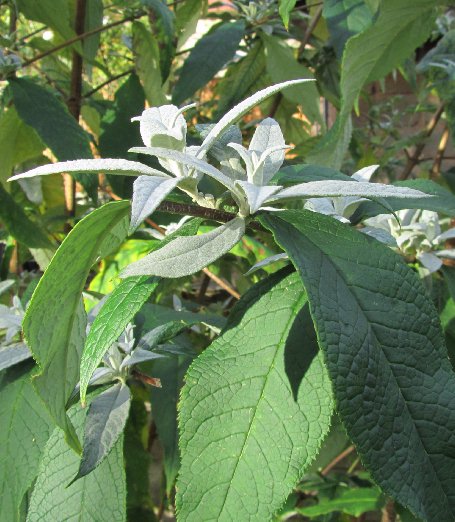 In the Autumn many plants replace the green foliage with smaller, grey leaves that can withstand the winter.

B. davidii can be a deciduous or semi-deciduous shrub depending on the winter temperature and genetics of the plant in question. Some cultivars lose all their leaves in an English winter but most replace the large green summer leaves with much smaller, grey tomentose (covered in small hairs) leaves which are more resistant to frost and the drying effect of cold winds.

The largest plants, both feral and garden cultivars, are practically small trees up to 5 metres in height but can be kept a more modest size in a garden by regular pruning. The root ball is often surprisingly small compared to the size of the plant, an evolutionary adaptation to growing in rock fissures or shallow soil. This is also a good reason for regular pruning as the small root system can make larger plants liable to wind rock and even up-rooting.

Buddleja davidii has 76 chromosomes and described as being tetraploid. Most plants and animals are diploid and have two sets of chromosomes, one set from a maternal parent and the other from the paternal side. At some point in the evolution of B. davidii a doubling of the chromosome number occurred creating four sets of nineteen chromosomes and hence the entire genome was doubled up. Over time some copies of genes are lost where the four copies are not beneficial to the plant and it is then impossible for the plants to return to a diploid state in a later generation. Not all the Buddleja genus is tetraploid - for example B. globosa is diploid with 38 chromosomes and B. albiflora, a chinese species very similar to B. davidii, is hexaploid with 114 chromosomes in six sets (3).

Buddleja davidii had been known as B. variabilis until WWII because of the large, natural variation in the wild population. This also meant the species was divided into a number of subspecies or varieties based on various features such as inflorescence size and colour or foliage type. The published subspecies/varieties are:
B. davidii var. alba is the white-flowered form.
B. davidii var. nanhohensis has delicate lilac flowers and small, grey foliage; this form has been developed into several popular cultivars.
B. davidii var. magnifica has normal lilac coloured flowers but extra-large panicles up to 60cm in length;
B. davidii var. superba with even longer panicles;
B. davidii var. wilsonii has very lax panicles and ruffled, reflexed petals;
B. davidii var. veitchiana has pale blue flowers that are earlier than the species.

The species can be a wide range of pastel colours, from pink, lilac, mauve through to lavender or occasionally powder blue. The 'Alba' form has been recognised as a separate entity. The cultivar 'Autumn Beauty' (syn. 'From Beijing', 'Clive Farrell'), although not currently formally classified as B. davidii, can also lay claim to be a variety or form of the species as it is a naturally occurring, late flowering variant with pale lilac flowers.

However, the monograph by Leeuwenberg (1979) on the genus Buddleja (4), the authority in these matters, does not accept any botanical varieties or subspecies; all those described fall within the natural continuous variation of the species, and do not merit formal recognition. They are are all reduced to synonyms and included only as informal 'forms'.

In the recent RHS trial 125 cultivars of B.davidii including a few hybrids were grown under controlled conditions (5). It is true to say that a few of these were duplicates that had acquired a second name by mistake, or had mis-identified. But this still leaves well over 100 cultivars in this trial alone, which was far from complete. You also have to consider there are several B. x weyeriana hybrids and at multiple hybrids with B. fallowiana. There are also current breeding programmes increasing the possibilities by hybridisation with B. lindleyana.

The colour range is now immense - white, palest pink all the way through to deep navy blue and dark purple. Pink, purple and blue are the dominant shades and so far a true red B. davidii has eluded plant breeders. The cultivars Sugar Plum and Summer Beauty are very deep pink and Royal Red is a deep maroon. Yellow has been achieved through hybridisation with B. globosa and these weyeriana hybrids are fully described on a separate page.

New cultivars are being created the whole time. Many of these are hybrids carefully bred to produce sterile plants as some US states have declared Buddleja davidii an invasive and noxious weed. There can be shadowy practices in some Buddleja breeding programmes involving the use of chemicals to alter the chromosome number or radiation to introduce mutations with the aim of developing new traits or inducing sterility. However.here is still an increasing number of 'straight' B. davidii cultivars being released - the small Buzz series from Thompson and Morgan is a good example of what can be achieved through traditional selective plant breeding. 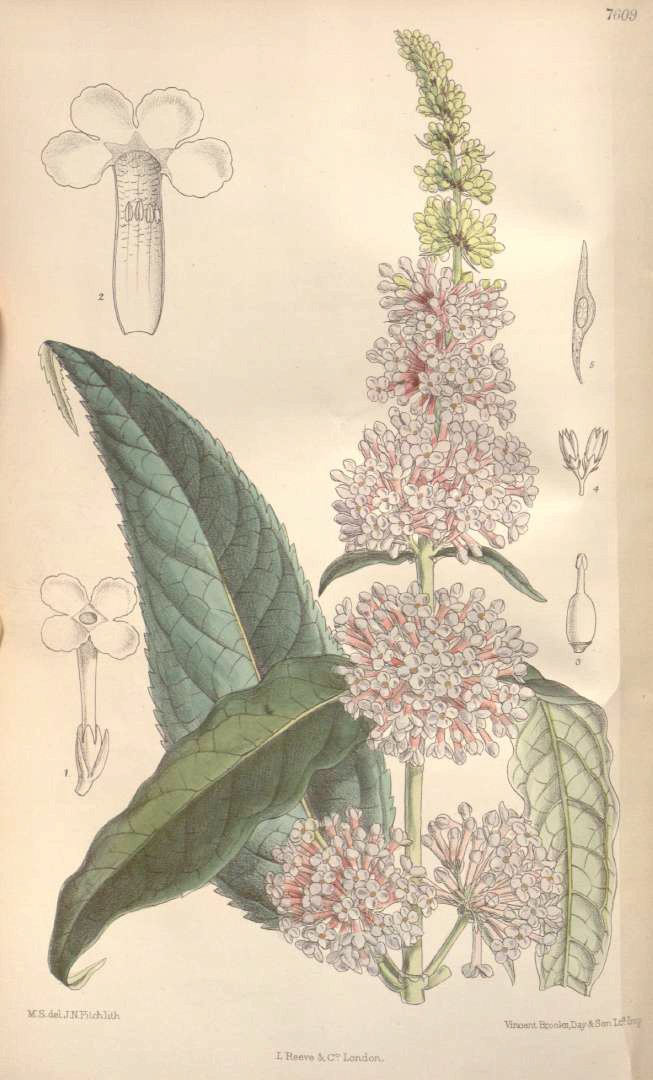