THE LO AND BEHOLD®
BUDDLEJA HYBRIDS

The Lo and Behold® hybrids are a series of smaller Buddleja bred by Dr. Dennis J. Werner at the North Carolina Agricultural Research Service, part of the NC State University USA. The hybrids were requently selected to have a very low seed-set and to be non-invasive, a requirement in several states of the US where B, davidii is banned from sale as a noxious weed. They are not necessarily fully sterile and several of the more recent introductions are derived from the earlier hybrids. They vary in size from about 30cm height and spread for the smallest, with the larger ones about the size of a smaller B. davidii cultivar about.

Since the introduction of 'Blue Chip' circa 2008, other similar breeding programmes have resulted in a plethora of small Buddleja being released to the market. These have had variable success, and some series have even been withdrawn from sale within a few years of introduction. The Lo and Behold® hybrids have mostly remained available, although some may be superseded in the future, and thus far represent the most durable of the new dwarf hybrids. As the first and most persistent, they merit a separate page.

Trade names often vary between North America and Europe, so both are shown. Pedigrees are shown where available. With the notable exception of 'Miss Molly' (syn. Red Chip') they share a common ancestor in a hybrid of B. davidii 'Nanho Purple' x B. lindleyana ('NC-2000-1'), and all have some contribution to their genetic makeup from B. globosa via B. x weyeriana 'Honeycomb'.

The first to be released and the source of many of the later Lo and Behold® hybrids. It was hailed as the first truly dwarf Buddleja, although 'White Ball' probably has that honour, but it's certainly different from anything that came before.

Once fully established 'Blue Chip' grows to about 1.5. metres height and spread with a dense and rounded habit, so not a very tiny cultivar. The foliage is unlike B. davidii, which comes from its B. lindleyana heritage, but the leaves are dull rather than glossy. The inflorescences are small, and the flowers crowded on the panicle; the petals tend to fold over and can obscure the throat of the corolla. The colour, although described as blue, is more of a muted mauve-purple. 'Blue Chip' is not fully sterile, but the seed set low enough to render it non-invasive. 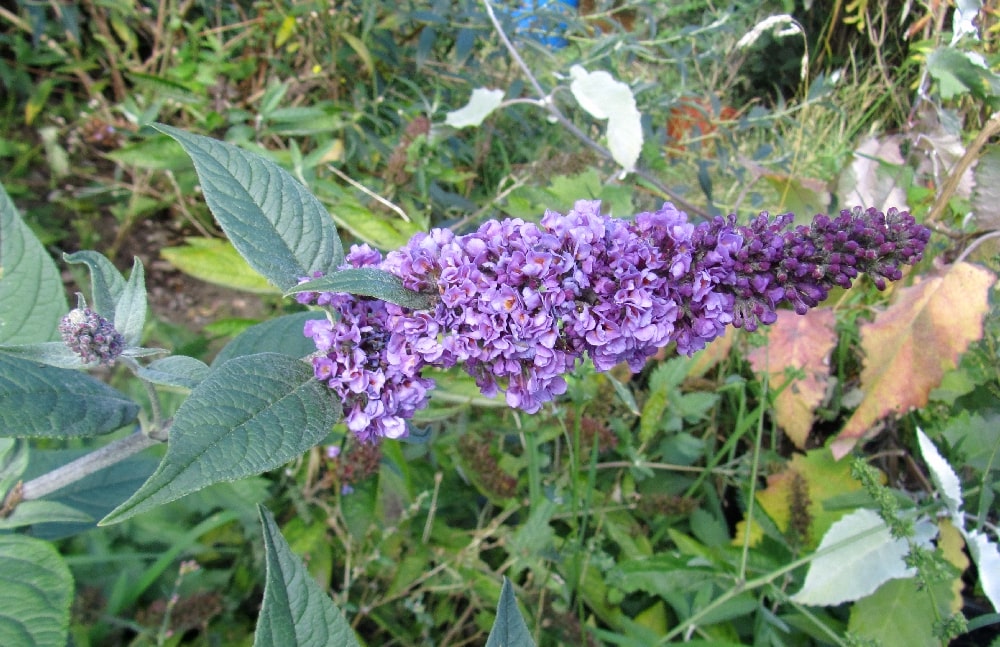 A 'Blue Chip' inflorescence in the autumn.

'Ice Chip' is a seedling of Blue Chip and shares some features, although it is a much smaller plant reaching only about 40cm in height. The foliage is similar to Blue Chip except the leaves are more pointed. The flowers likewise don't properly open because the petals (corolla lobes) are very lax and not erect, although the panicles are much longer and less crowded. It flowers from early summer onwards.

I tried planting one in the ground and it never grew at all. The pot-grown specimen is now nearly a decade old, and flowered well in a greenhouse in its first two years. Thereafter, it became stunted and weak. My impression is that the plant needs regular renewal, best achieved by taking cuttings every couple of years.

A similar size to 'Ice Chip', or possibly smaller. It has rather dull lilac-mauve flowers and the panicle suffers similar crowding issues to 'Blue Chip'. Derived from a cross of 'Blue Chip' and 'Miss Molly' ('Red Chip'). Not one I've grown. 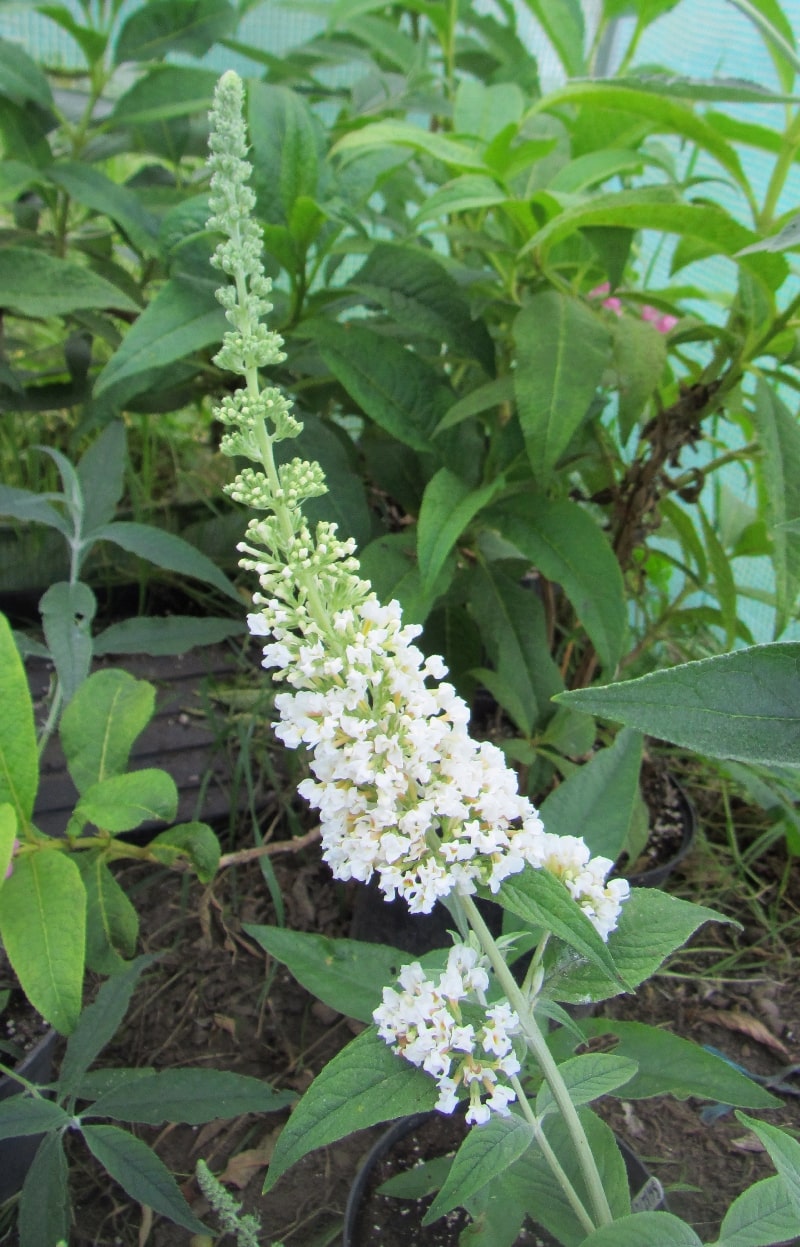 The 'Ice Chip' inflorescence in summer.

Originally named 'Miss Molly', it was renamed 'Red Chip' for Europe. An exception in the series as it does not derive from the NC2000-1 hybrid of B. lindleyana and B. davidii. 'Miss Molly is from 'Miss Ruby' ('Attraction' x 'White Ball') backcrossed to Buddleja x 'Attraction' (a hybrid of B. x weyeriana Honeycomb and B. davidii Royal Red). 'Miss Molly' ('Red Chip') is similar to 'Miss Ruby', slightly smaller at 1.5 metres height and with more intensely coloured flowers. Described as red, the flowers are actually a good intense magenta-pink; there is some fading to purple as the flowers go over. Flowering is at the same time as traditional B. davidii cultivars, July onwards.

I've found 'Miss Molly'/'Red Chip' to be both seed- and pollen-fertile, although the resulting seedlings proved rather weak.

Many European nurseries had trouble propagating this hybrid as the foliage became distorted during preparation for sale, although this was not apparently due to a pathogen (personal communication: Bransford-Webbs), and so, despite the spectacular colour and reliable garden performance, this cultivar has become difficult to source in Europe. 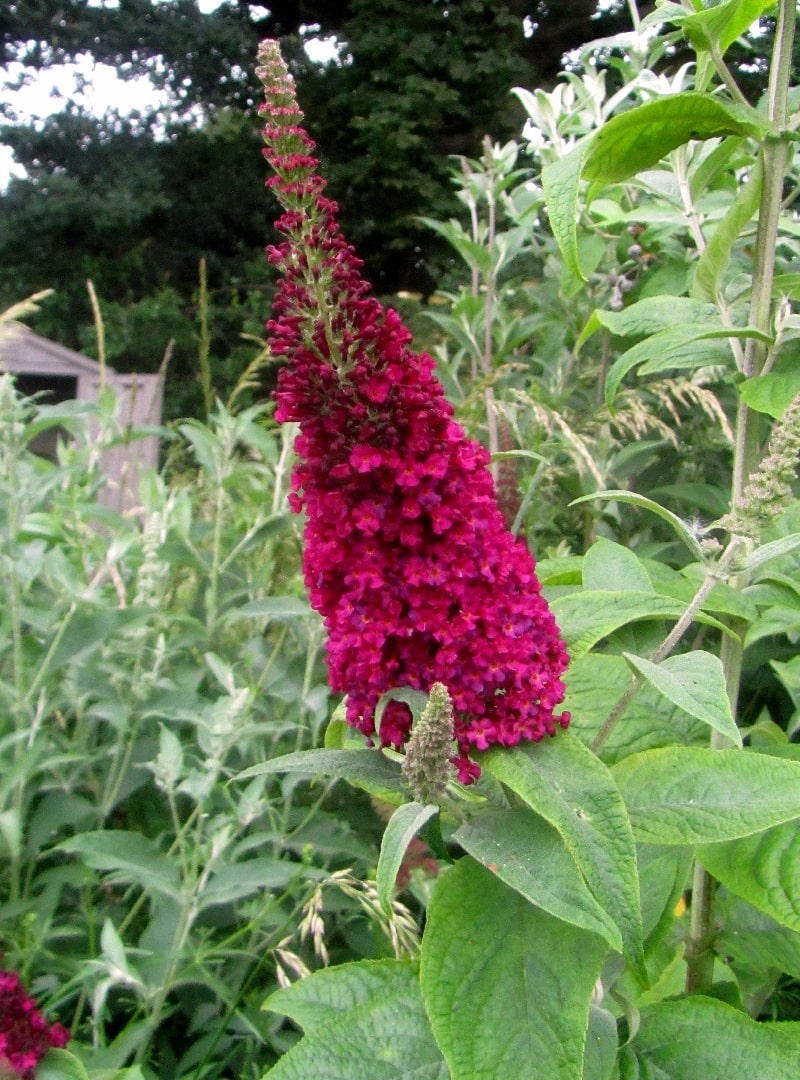 Very different to the others in the series, it was billed as a low growing shrub with a horizontal growth habit. When I planted one on my plot, it shot up and reached 2 metres height very quickly and pruning did not restore a prostrate growth habit. The branches are somewhat arching and bear pendulous panicles of purple flowers. The panicles are small and the flowers rather dull. Moreover, it's doesn't flower until the autumn, from late September, and the inflorescnces are disappintingly small. A seedling of Miss Ruby crossed with an unnamed hybrid, it was renamed 'Purple Chip' for Europe to match the rest of the range. 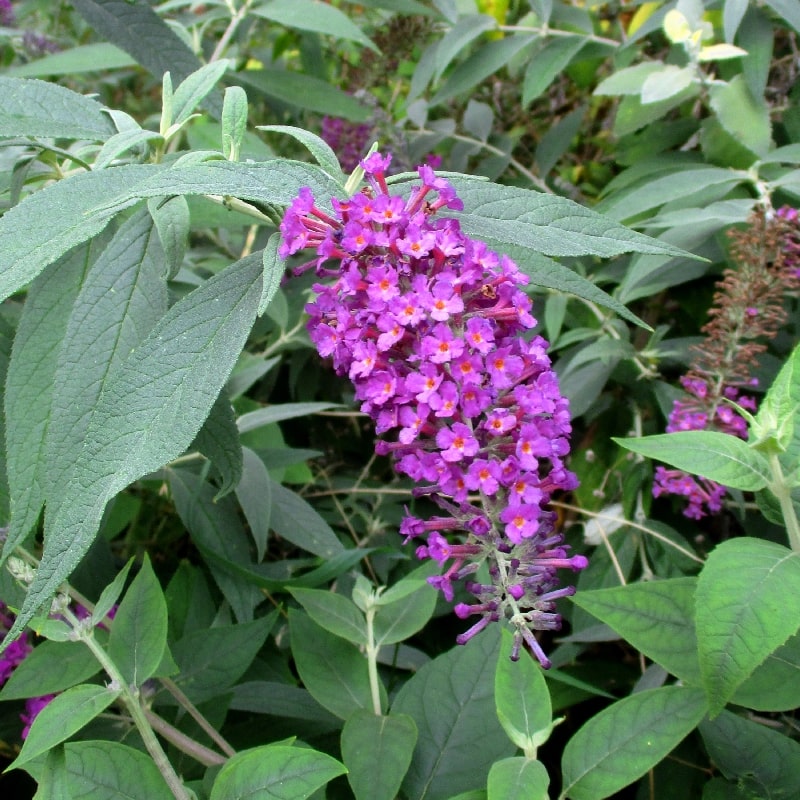 A later release in 2014 a result of a cross of 'Blue Chip' with an un-named B. davidii hybrid. It's reported to be an improvement on Blue Chip with better silvery foliage, consistently blue flowers and less brittle stems. The size of the mature plant sould also be considerably smaller. 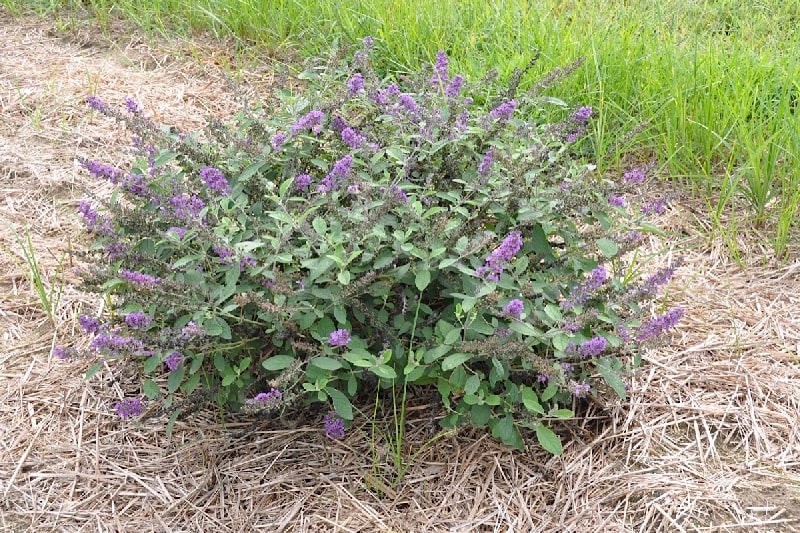 The second release in 2014, this adds pink to the range of colours in the LO AND BEHOLD® series. Reported to be very compact and floriferous, it resulted from the cross 'Lilac Chip' x 'Miss Molly'. Photo courtesy of Dennis Werner 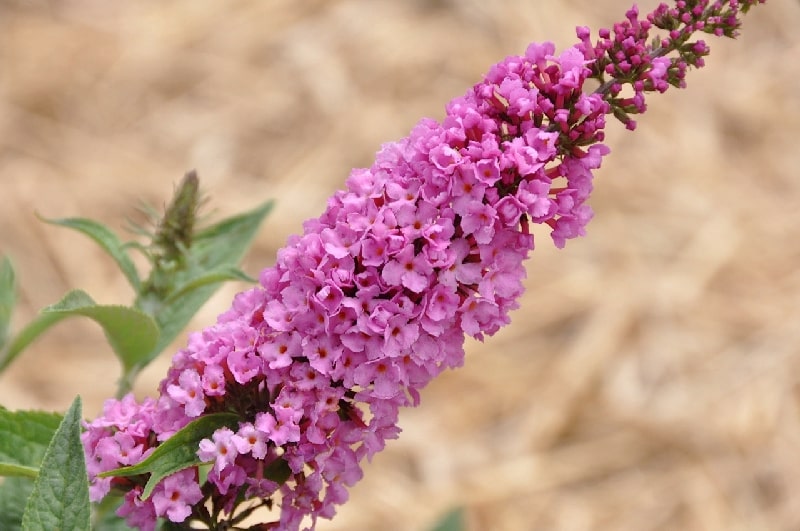 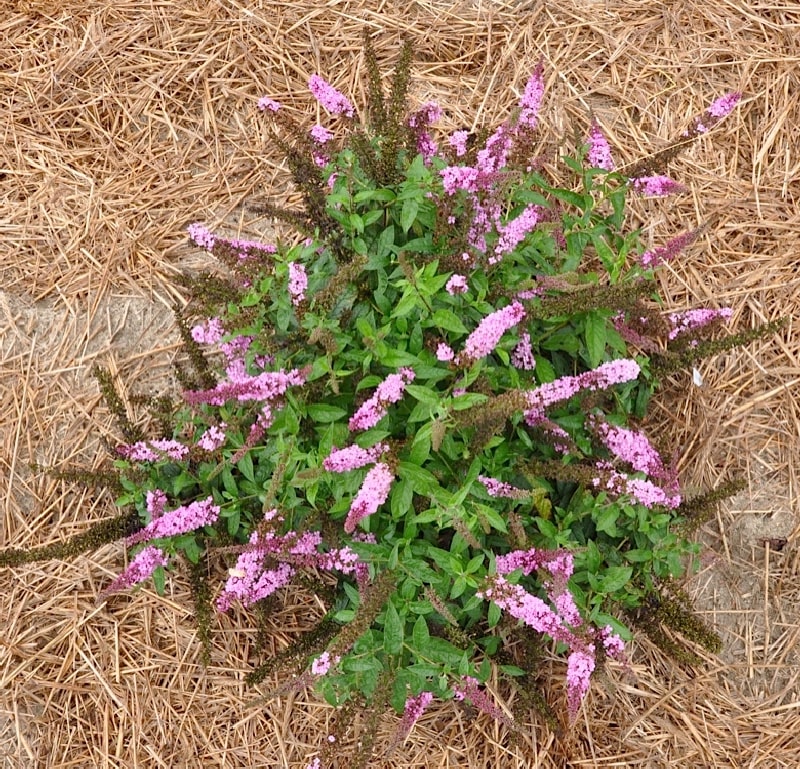 Added recently to the LO AND BEHOLD® range circa 2019, 'Ruby Chip' was developed by Megan Mathey at Spring Haven Nurseries (Grand Haven, MI, USA) from 'Lilac Chip' backcrossed to 'Miss Molly', thus far the only one of the series not bred by Dennis Werner. 'Ruby Chip' is small plant, only slightly larger than 'Pink Micro Chip' and with flowers of a similar colour to 'Miss Molly'. It has not (as of 2022) been introduced into Europe.