A plant of unknown origin, and it came to me erroneously labelled as B. delavayi. The individual flowers are a little larger than others of this type, and the inflorescence panicle is more densely packed. It has crossed readily with other B. forrestii plants. 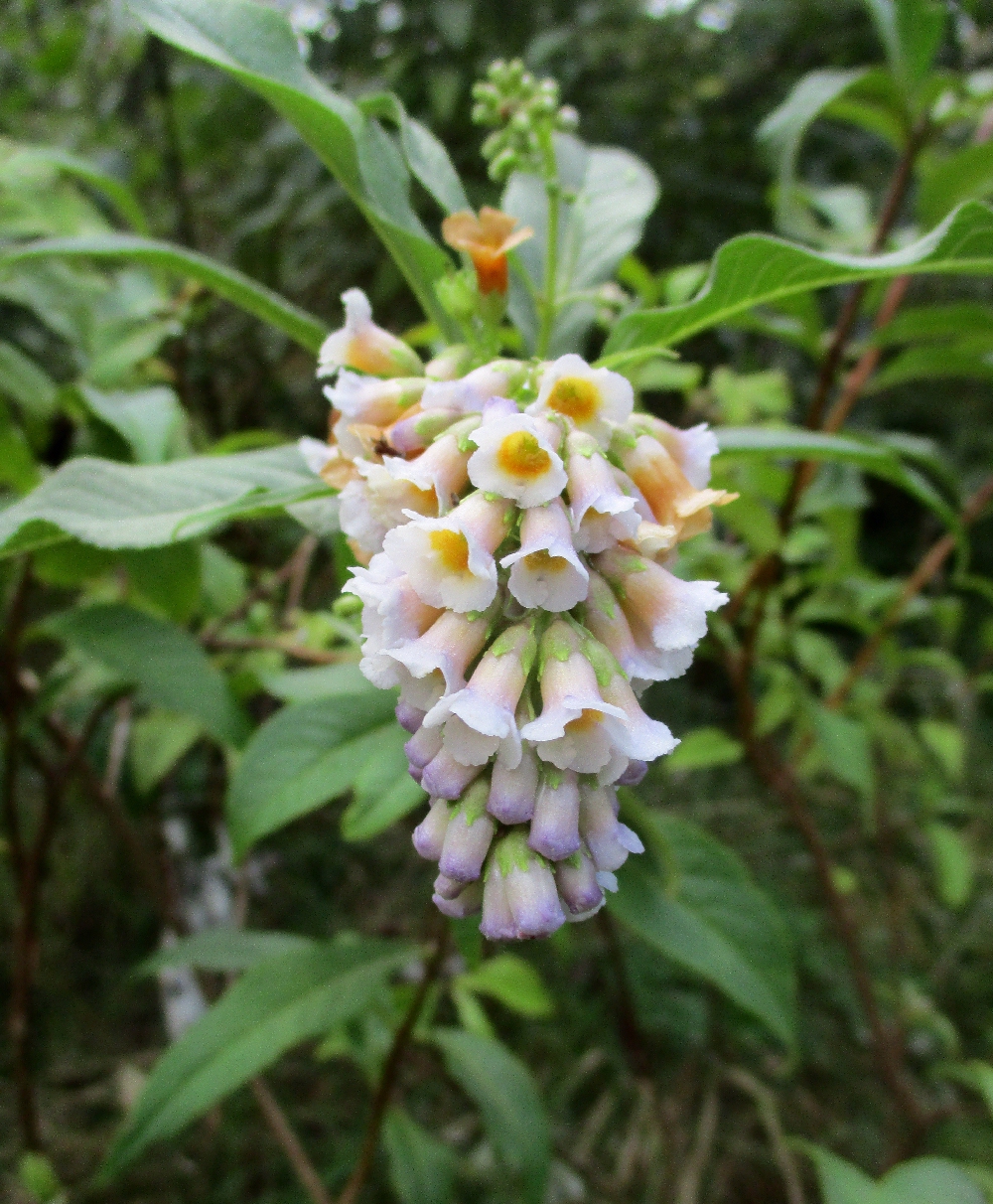 B. forrestii form limitanea or a Hybrid?

This plant with mauve flowers is a mystery. Labelled as B. limitanea, and looking exactly the same in habit and leaf as that form, the flowers are rather atypical in having longer, cylindrical corolla tubes and slightly tomentose (felted) parts. Its origins are unknown, and I suspect it is either a natural hybrid or one raised ex situ. It certainly looks to be descended from B. forrestii, and probably the B. limitanea form; what other species is involved is more of a mystery, but B. davidii is possible. I have speculated it may be the hybrid Buddleja X ‘Hotblackiana’ (B. forrestii X B. davidii) currently thought lost to horticulture, although I am unable to confirm this. It’s fully fertile and I have raised a number of its seedlings. It can cross with several different species.

B. forrestii x B. davidii

A chance hybrid I raised a while back, the pollen parent is probably B. davidii 'Gulliver'. Very long pancicles like the seed parent; although the individual flowers are more delicate. Heavy B. forrestii foliage, and generally looking like that species, it's proving hardy and not too vigorous.

B. nivea x B. forrestii

Not every hybridisation I try works, and in this case the reciprocal failed. B. nivea is quite promiscuous and can be pollinated by many of the Asian species. With most of these hybrids, the B. nivea traits tend to dominate. This one is unusual _ the foliage isn't very hairy and the individual flowers are quite large.

An example of the species growing in situ at 2000m, Lenteng, Mizoram, India. Some plants have these very upright and dense panicles. However, the individual flowers are identical to any other member of the species.

B. macrostachya seedling from a cross I made of RF 040 X GWJ 9286. In some seedlings RF 040’s features were dominant and a couple even had pink flowers. This one has inherited some of the features found in the flowers of GWJ 9286, such as the intense orange throat and softer, pure white corolla lobes. Interestingly, it also flowered much later (well into October) than its siblings. Only one of ten inherited the smaller, silvery foliage of GWJ 9286.

B. macrostachya seedling from the reciprocal cross to the one above: GWJ 9286 x RF 040. The variable siblings were all intermediate between the parents, although the features of RF 040 showed some dominance. This one has inherited the inflorescence form of RF 040. All the plants of both reciprocals were unmistakably B. macrostachya and all set seed. They gave no reason to think they might be inter-specific hybrids.